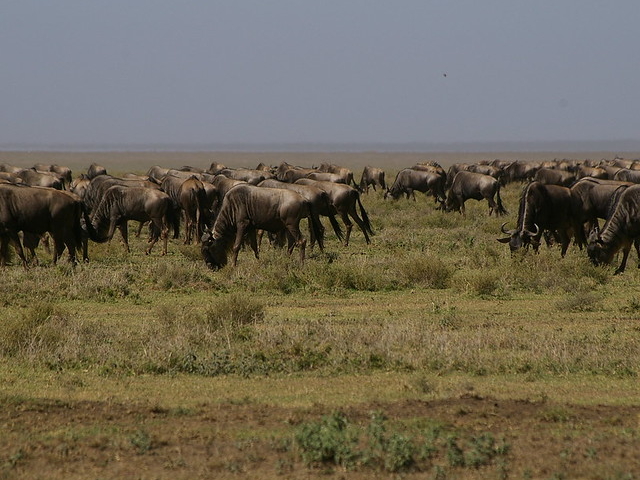 The most famous attractions are on your itinerary:

U.S. – London/Amsterdam flight to Tanzania’s Kilimanjaro International Airport. our experience talented multilingual guide/Travel representative will meet you at the airport and escort you to Arusha for lunch. Transfer for drive to the Ngorongoro Conservation Area. The Sopa Lodge sits at the rim of the 1,800-foot-deep crater; each room has a spectacular view.

After breakfast, board your special 4×4 land cruiser and head down into the Crater for a full day of game viewing. This collapsed volcano (caldera) creates a Garden of Eden environment for a large and diverse wildlife population. At 102 square miles, it’s the largest intact caldera in the world. You’ll enjoy a relaxed picnic lunch under the trees.

It’s a short drive to the Serengeti National Park, via Olduvai Gorge. This remote spot is where Mary Leakey made her famous discovery, a fossil skull of prehistoric humans dating back nearly two million years. Enjoy a picnic lunch and peruse the on-site Gorge Museum. As you continue to the Serengeti National Park, you’ll see many of the Big Five (leopard, lion, buffalo, rhino and elephant). Serengeti is the most famous of Africa’s game parks, and boasts the highest concentration of wild animals in the world. This is where the dramatic wildebeest migration begins.

Morning and late afternoon game drives in the Serengeti (endless plain in the Masai language). The gangly wildebeest is the dominant herbivore in this complex ecosystem. Hundreds of thousands of wildebeest, joined by zebras and gazelles, chomp on the verdant grasslands of the Serengeti. Lions, leopards, cheetahs and other predators follow along with ravenous interest. The park also boasts nearly 500 species of birds.

Humans also inhabit the Serengeti. You may see the regal, red-robed Masai during your two game drives today. The Masai bring a fierce reputation and abundant cattle to graze on the rich grasses. A visit to an actual Masai Village is optional.

As in all ecosystems, the vegetation dictates which animals reside there. The Serengeti has distinct zones, including short and long grasslands, acacia savannah, dense woodlands, lakes and black clay plains. For example, giraffes browse on the acacia trees, lions follow the grazers on the open plains and flamingos are found in and around the lakes.

After breakfast, depart for Lake Manyara National Park, arriving in time for lunch at the Lake Manyara Serena Lodge. Nestled into the steep Rift Valley wall, its shallow alkaline lake is surrounded by forests of fig and mahogany, open grasslands and huge, ancient baobab trees. You’ll have a chance to stretch your legs during an escorted nature walk today.

The Great Rift Valley was formed by a massive upheaval in the earth’s crust. It’s so dramatic that when astronauts were on the moon, the Great Rift Valley was clearly visible to them. Lake Manyara hosts a large population of hippos in the Simba River. You’re sure to see these snorting, yawning giants on your morning and afternoon game drives. Also look for abundant birdlife, including herons, storks, cranes, egrets, spoonbills, ibis, pelicans, cormorants and plovers sharing the hippo pools.

After breakfast, transfer to Arusha for lunch and then Kilimanjaro International Airport for your journey home.