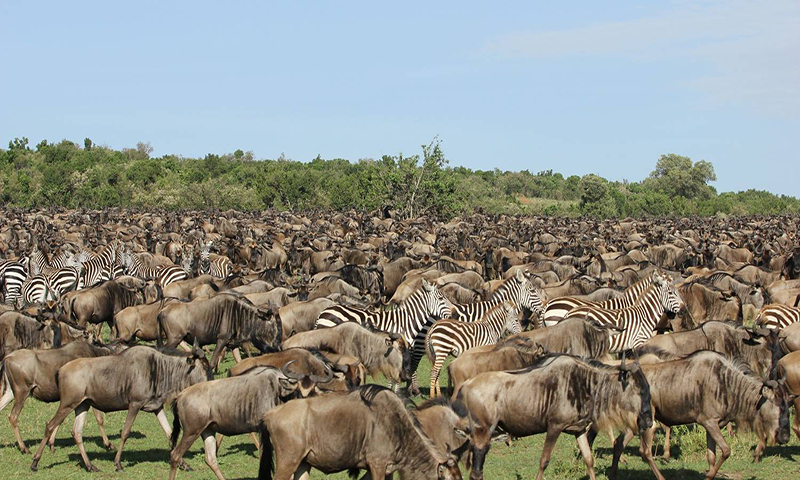 The most famous of Kenya’s national parks, the Masai Mara caps of northern end of the Serengeti Plain. The Mara River, a natural boundary between Kenya and Tanzania, sets the stage for the twice-yearly spectacle of wildebeest and zebra herds. Lions reside in large prides, and the ability to observe them at close range astonishes most first-time visitors. Early morning balloon rides are available over the seemingly endless plains, followed by a champagne brunch and game drive.

Home to thousands of flamingoes and other waterfowl, the alkaline Lake Nakuru shares its name with the park that surrounds it. In Nakuru, there is a strong possibility of spotting leopard. Rhino can be observed here as well as large populations of baboons and waterbuck. This is the only park in which Rothschild giraffe can be found.

Settle in the lodge.

Full day spent exploring the unique park which really forms the northern part of the famous Serengeti national park. Meals and overnight at the lodge.

Pre breakfast game drive 0630hrs-0930hrs. After breakfast depart to Lake Nakuru National Park to arrive in good time for lunch at your Sarova Lion Hill. Set on a plateau in an elevation above Lake Nakuru, Sarova Lion Hill Game Lodge has 67 chalets all overlooking the lake, within the Lake Nakuru National Park . It is the perfect place to experience one of the world’s largest ornithological spectacles,The Pink Flamingo, or a rich concentration of wildlife including black and white colobus monkey and is also a famed Rhino Sanctuary. Afternoon game drive in the park and around the lake.Lake Nakuru’s claim to fame is anchored on its flamingo’s and the over 400 species of birds found here. The lake itself is a soda lake on the floor of the rift valley. The sight of the at times millions of flamingos is quite spectacular. From a distance the lake appears ringed in pink. The Lake has also earned a reputation as an important haven for endangered species- particularly the Rothschild Giraffe and the black and white rhino. Lions, waterbuck, buffalo and baboons are all residents here.

0800hrs-1100hrs: After breakfast proceed for a game drive. Lunch followed by departure for Nairobi arriving mid or late afternoon.